My latest steampunk fantasy story to be published has arrived! Down in the Clockwork City has been released under the Society of Misfit Stories anthology series, and is now available for Kindle download from Amazon.com. The description they gave it has a bit to be desired, but I didn’t come up with it. So far it doesn’t have any reviews, so if you read it and like it please, review away! 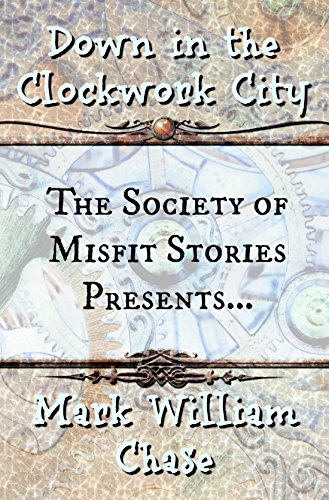 Vintage Tomorrows is an hour long documentary on the steampunk movement, and I must say, it is quite impressive. I admit, I was half expecting it to be a poorly filmed work of amateur film making, painfully narrow in its coverage, or some obvious attempt to capitalize on the steampunk movement. To my very pleasant surprise, Vintage Tomorrows is nothing of the sort.  The documentary itself is indisputably professional, the subject matter is quite broad, and the individuals they interviewed were exactly the people they needed to interview. Allow me to name off just a few people featured in the documentary: William Gibson, Bruce Sterling, Cherie Priest, China Miéville, Phil and Kaja Foglio (Girl Genius), Cory Doctorow, Kevin Steil, and musical appearances by Abney Park and Unwoman. Sold already? I thought so!

Vintage Tomorrows covers not only the costuming and literary aspects of steampunk, but also the strong maker community as well. The documentary further explores many of the social and philosophical aspects of the steampunk movement, combined with several refreshing discussions on the subject of retro-futurism.

Anyway, the documentary is certainly worth watching. It is currently available on Netflix streaming (that’s where I saw it), and it appears to be available on Amazon, iTunes, and other places as well. You can find out more at vintagetomorrows.com, and be sure to watch the trailer below!

Universal Studios Orlando has opened a steampunk chocolate factory, called the Toothsome Chocolate Emporium! How cool is that? You can see a bunch of pictures over on the Journey Through Style blog, and check out the news story on the WESH Orland. Apparently, it’s not just a chocolate factory, as it also features a full restaurant, and since its on the Universal CityWalk, you can get in without even needing the theme park tickets.

Famed violinist Lindsey Stirling tears it up in this new (and for lack of a better descriptor) post-apocalyptic steampunk violin music video. This is like something straight out of a Mad Max film, with the added bonus of being an absolutely fantastic song. She has other steampunkesque music videos too, such as Roundtable Rival, as well as a great pirate themed shanty called Master of Tides.

With all the superhero movies that have been coming out of late, perhaps it’s time for something a little new, a little old, and a little different? Well Disney Pixar has a nice little animated short film called Sanjay’s Super Team, in which young boy finds a new, and very old, brand of super heroes…

Now this is a fantastic 8-bit game idea! A Mortal Kombat-style fighting game with legendary scientists and inventors duking it out with superhuman powers and abilities reflecting their most famous discoveries. The game features an evolving Charles Darwin, a space-warping Albert Einstein, a lightning-throwing Nikola Tesla, a spectrum-blasting Isaac Newton, a black hole-hurling Stephen Hawking, an angle-kicking Pythagoras, a robot-commanding Alan Turing, and the ever-radiant Marie Curie (oh… too soon?).

It’s probably not a bad way for kids to learn about historical figures in science. You can find out more about it in this article on the Nerdist.

My steampunk fantasy short story, The Mines of Nuram, has been published in the January 2016 issue of Bards and Sages Quarterly. If you want to check it out, and read some other good stories as well, you can get a print copy through Amazon or a Kindle addition if you prefer. 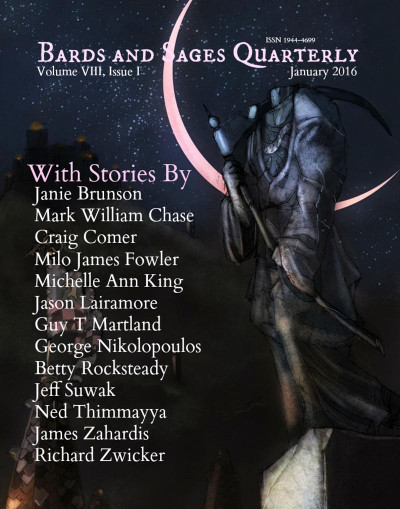 Here’s a DIY video for making your own gaming table. It’s pretty sweet! I just wish I had more skills. And a workshop.

The Mysterious Explorations of Jasper Morello is an animated short film by Anthony Lucas. It is a beautiful blend of Gothic horror and steampunk aesthetics, complete with iron dirigibles, a grungy Victorian city, a mad scientist, a tragic hero, and a horrifying monster. It doesn’t get better than this!

To go along with my steampunk speakers, I have now put up my Instructables tutorial for putting together a nice little steampunk audio amplifier. This is the amplifier which I have mounted on the hutch over my desk, through which I play all music an audio from my PC. This is a bit more involved that the steampunk speakers, but if you feel up to the challenge, feel free to give it go!